Westborough – Harold E. Engberg, 88, died Saturday Feb. 19, 2011, at the Lutheran Healthcare Center in Worcester, with his wife of 65 years by his side.

Born July 1, 1922, in Worcester, he was the son of Eric Hjalmar Engberg and Esther Frida (Svensson) Engberg. He graduated from Auburn High School, where he was active in track and basketball. He also served as the senior class president. He then went on to graduate from Bentley College and was employed by Ford Motor Company, Dearborn, Michigan, in their finance department. 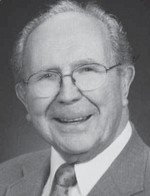 A decorated veteran, Mr. Engberg served as a 1st Lieutenant in the Army Air Corps during World War II. As a B-24 bomber pilot, he was stationed in England, seeing action in the battles and campaigns of Ardennes, Central Europe and Rhineland, including 27 missions over Berlin.

After earning his CPA, he joined Harry Wallace Accountants in Worcester and later was employed in the finance department of Simonds Saw and Steel in Fitchburg. After retiring from Simonds, he became treasurer in the corporate headquarters of Pferd, Inc. in Leominster.

Mr. Engberg was an active member of the Evangelical Congregational Church, serving as a Sunday School teacher, deacon, trustee and treasurer. He was also past president of the church's men's group and a coordinator of the Men's Lunch Bunch.

He worked in the construction of Habitat for Humanity homes in Westborough and served as its treasurer, and was active with the Scouts serving as Cub Master. He enjoyed photography and traveling. For many years, he and his wife presented travelogues for local organizations. He was a talented woodworker and enjoyed hiking, skiing and gardening. His greatest enjoyment was spending time with his grandchildren.

The family would like to thank the staff at the Lutheran Healthcare Center and Jewish Hospice for all of their loving care.