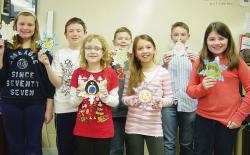 Shrewsbury – After this long winter, talk of spring and hope that it arrives soon is on most minds. But the Student Council at Shrewbury's Spring Street School plans to keep winter alive for just a bit longer. The students have organized a fund-raiser called “Project Snowflake” to raise money for The Hole in the Wall Gang Camp, a youth camp in Connecticut for kids with cancer and serious blood diseases.

The students were inspired by two books, “Robert's Snow” and “Robert's Snowflakes,” by Grace Lin. After Lin's husband was diagnosed with cancer she wanted to find a way to bring the outside in, explained Sandra Travers, a fourth-grade teacher at the school who is leading the effort, along with fellow teacher Barbara Luby.

For the original Project Snowflake, author Lin asked illustrator friends to decorate wooden snowflakes, which were then sold on eBay. The proceeds, $100,000 in sales, were donated to the Dana- Farber Cancer Institute. Taking a cue from that success, the students asked everyone in the school to decorate paper snowflakes and dedicate them to someone special. Patrick Duke, one of the Student Council members, said he dedicated his snowflake to his grandfather, who had recently passed away from cancer. Catherine Samia said she had decorated her flake with a dove and created it in memory of her mother, who she lost recently to cancer.

The next step is to sell the flakes to raise money for the Hole in The Wall Gang Camp, which was chosen after Travers spent time there this past summer with her son, who is a hemophiliac. Travers explained the camp was incredible and the staff donates its time free of charge.

The flakes were displayed at the school through March 11, but will also be sold at Spring Street School's annual Fun Fair, which will take place Sunday, March 20. There is no minimum or maximum donation amount to purchase a snowfl ake. Luby said 175 flakes have already been purchased by the parents of students who made them. Donations have ranged from $1 to $20, she said. They are hoping all 2,000 flakes made by the students will be sold.

The feedback and donations received so far have been encouraging.

“This has just sort of exploded,” Luby said. “The entire community has really gotten on board.”