Marlborough – Nickole Soto and Kevin Boucher, two multi-athlete students from Assabet Valley Regional Technical High School in Marlborough, have led by example as captains of their respective teams. They display the best of what it means to be a student-athlete.

Soto is leaning toward attending Mount Ida College in Newton and continuing her athletic endeavors, while Boucher plans to work in the engineering field and initially attend Quinsigamond Community College. He then plans to transfer to a fouryear school or get advanced technical training at night while working during the day. Currently, he is busy attending a co-op program at Saint-Gobain Abrasives in Worcester, where he tests grinding wheels, abrasive belts and performs CAD drafting and drawings with other engineers. Boucher reported that he'sl likely have his name on a patent before he graduates later this year.

Soto said she credits her social studies teacher and basketball coach, Frank Ferreer, as her inspiration to always push herself to do better.

“He doesn's give up because he wants you to do your best and exceed what you think you can do,” Soto said. “As you get older, you learn that you need to step up. After a while, even as a freshman here, you need to stand up and lead by example.”

Boucher has found his high school experiences to be invaluable.

“I'se had a great four years here at a great school and awesome opportunities,” he said. 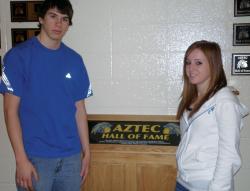