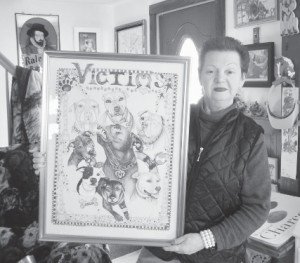 For the last five years, Staniunas has been involved in animal rescue, working in conjunction with the Baypath Humane Society in Hopkinton. In addi- tion to working with animals and with children as a daycare professional, Staniunas has privately taught art to children in Northborough for 20 years. Due to her involvement with animals, she has also brought her work home and now has two dogs and four cats, all from rescue shelters.

Staniunas wrote Gov. Deval Patrick about displaying her artwork at Doric Hall to raise awareness about animal abuse. Patrick welcomed the opportunity and the picture was on display from February 7 to 11.

“When Michael Vick's [dog fighting] story broke, I wanted to help victims of dog fighting, one of the most horrific animal abuses there is,” Staniunas said.

Ever since, she has tried to follow the progress of the rescued dogs.

In a related dog-fighting ring arrest in Missouri, Staniunas learned the story of a pitbull named Fay, which inspired her to draw “Victim.” In the picture, seven dogs surround Fay, whose lips were cut off by her owner after losing a fight. The surrounding dogs are also victims of abuse – some at the hands of Vick.

Staniunas gives not only her time and art to animals, she has begun to give a percentage of her commissions to animal abuse shelters. She hopes to raise awareness about these atrocities.

Currently, Staniunas is working on stained glass works and on a portrait of Mother Teresa surrounded by animal friends, which she hopes to display at churches and animal shelters.

She also has begun to offer her services as a portrait painter. She crafts works of pitbulls for their owners and donates a portion of her proceeds to help the breed.

Through her artwork and philanthropy efforts, Staniunas hopes that young people are better informed about animals and take a “kindness” message to heart.

“I wish the schools would get more involved with the kids helping animals,” Staniunas said. “I hope the children in my community will take up the cause and promote [the motto] “Be kind to animals,” and help the shelters and any animal they see that needs help.”