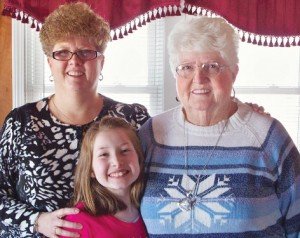 Hudson – In December 2008, Hudson resident Paula MacMillan found out that she had breast cancer, a disease that affects 100 out of every 100,000 women in North America according to www.ww5.komen.org, the Susan G. Komen for the Cure website.

She had an operation the day after Christmas, as well as several other operations and as she put it, a “series of treatments.” It was difficult for MacMillan, but throughout the ordeal she had her husband, Bob, whom she called her “rock” and among other relatives – her daughter, Andrea, son-in-law Roger Guerin and grandchildren, Katie and Nick.

“The journey was to keep on going no matter what,” MacMillan said.

Her family and extended relatives and friends played an important role in her recovery. They cheered her on to get better and MacMillan is convinced that it would have been a far more difficult feat without their love.

Each day, Andrea mailed her a homemade card with thoughts of hope, love and support. Katie, a 12-year-old sixth-grader from Northbridge Middle School, drew many pictures for her grandmother while the older woman was undergoing treatment. MacMillan called them “keepers.”

Now MacMillan is in remission and doing well, and her fight inspired Katie to do something for others who are battling breast cancer.

“She has always had a creative mind,” MacMillan said.

Katie calls her project, “Watch Me.” She makes watches with beaded bands and sells them, sending the profits to Susan G. Komen for the Cure, formerly known as the Susan G. Komen Breast Cancer Foundation.

MacMillan said she was surprised, but proud, when Katie told her parents that she wanted to donate to the Komen Foundation in her grandmother's honor.

Katie said she began making the watches as 2010 Christmas presents for both of her grandmothers. After MacMillan got ill, Katie decided to sell the watches and donate the money “because my Grandma fought and won the war with breast cancer.”

Her mother helps with the project. Andrea said that she spends her “girl time” making the watches with Katie.

“I'sl either bead or string pins depending on what we are doing,” Andrea said. “We'se made approximately 66 watches.” She added, ” That's a lot of beading!”

Katie sells the watches for $ 20 each, and her mother and grandmother help out by showing them to potential customers. Her cousin also sells them at the medical office where she works. So far, Katie said she has made $600, but she wants to get to $800 for the Komen Foundation.

“When I sell a watch and tell the customer it's going to a good cause, I feel I'se done a good thing,” Katie said. “I know so many people are proud of me for doing it.”

Andrea is just one of the people who admires her daughter.

“The idea of a person Katie's age wanting to help fight this disease is amazing.”

She said Katie is very close to her grandmother and has witnessed how strong the older woman has been through her ordeal. MacMillan has been an “amazing role model for Katie.”

“I know there so many other children also doing their part to help the cause,” MacMillan said, “and we want to say how proud we are. My husband and I have been touched by the wonders of someone so young, yet so caring.”

Andrea hopes that Katie realizes how much her watches are helping people. “Katie loves her [MacMillan] very much and not a day goes by when we haven's touched a life by doing this,” Andrea said. “Even a little thing, such as making a watch, can give someone hope in the future.”

To order a watch, contact Katie at [email protected] or call 508-234-0756. Visit www.ww5.komen.org, for more information about breast cancer and the organization.