How can the Community Advocate help you promote your business?
Print Ads
Web Ads
Digital Marketing
Home Southborough One seat open in Southborough Board of Selectmen race
Facebook
Twitter
Email 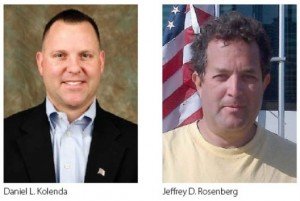 Two candidates are vying for the one open seat on the Southborough Board of Selectmen this spring. Here, in their own words, are their bios and thoughts on four issues –

Jeffrey D. Rosenberg – Business owner and resident who operates Modulation Magic Inc., a Broadcast Engineering firm and Every Body Balance Inc., a Pilates and Yoga studio with his wife Kelly. Jeff and Kelly's family consist of four children ranging in age from nine – 15 and two dogs. Jeff holds a BA in Communications with a Minor in Politics and History from Curry College. Jeff is always visible around town volunteering and he looks forward to serving his community in the role of Selectman.

Kolenda -The career experiences that have prepared me the best for the position of Selectman include my education as a lawyer and my elected and appointed service to our town. My legal education taught me to listen well, prepare fully and judge wisely. My service to our town on our Southborough Housing Authority, Advisory Committee, Southborough Youth Baseball, and Northborough Southborough Regional School Committee gave me great insight into the challenges and opportunities facing our town, as well as exposure to a number of dedicated volunteers across a variety of committees and departments from whom I have learned much.

Rosenberg – My leadership role in creating two successful corporations from the ground up has given me the skills and experience to run a budget and work through the lean times. Both companies started with an idea and less than $500.00 dollars in cash. I have learned to make the tough decisions and be responsible for the outcomes. I know when to delegate a task or do it myself and appreciate the value of surrounding yourself with good people and letting them do their job. In these hard economic times I feel we need a leader with business sense to see the big picture and to make common sense decisions to ensure the town's financial ability to be viable for years to come.

Kolenda -The ultimate voice for how Southborough is run remains with the people. From volunteer work through committees and boards, and then at our annual Town Meeting, we have the opportunity to speak freely, debate openly and then vote on the important issues facing our town. I feel strongly that involvement in our town government is needed by the largest number of citizens possible. My recent military service in Iraq demonstrated how people in a fledgling democracy will wait hours in long lines, through multiple security checkpoints to vote. I made a promise to myself then to participate fully in our democracy.

Rosenberg – All town residents should play a large role in local government. It is their tax dollars that support it, it is their community that is built by it, and it is their children who are educated by it. It is where they wake up and go to sleep. At minimum all who are of voting age should vote, they should participate in town meeting, they should volunteer on the boards and organizations around town and most of all stay informed about the community around them.

In many towns, the school budget is 50% or more of the overall budget. What ideas do you have that will help ensure equity, so that the needs of the schools as well as the town will be met?

Kolenda -In many towns, the school budget is over 50% of the overall budget, and, in fact, in Southborough it is even higher. My goal is to help ensure that our exceptional schools are fully funded, while also helping to identify areas for fiscal improvement. As an elected member of our Northborough-Southborough Regional School Committee, I have seen the dedication and hard work that goes into our budget process. I have seen the keen awareness of our collective economic crisis, and have witnessed and participated in the questioning of budget line items. I will continue those efforts as Selectman.

Rosenberg – Educating children is one the most important functions our local community undertakes. This is a large financial responsibility. It is important to balance this financial responsibility with the other needs (public safety, water, roads, recreation, etc.). In order to continue to offer the best possible education and balance a fair budget to the tax payers we all must tighten our belts. Audit how our dollars are spent to make sure school and town dollars are stretched the maximum benefit to all. At the same time we must encourage new growth in the form of new homes, new business and filling the commercial properties. This brings jobs and people to our town as well as tax dollars.

What US political figure, local or national, past or present, do you admire the most and why?

Kolenda -The US political figure that I admire the most is Ronald Reagan. While growing up in humble surroundings, Reagan became interested in politics and was a member of both of our main political parties. He rose to be the governor of California and ascended to the Presidency of the United States, with one election an absolute landslide. He was an avid supporter of the American Soldier, Sailor, Airman and Marine, and led us to believe that America's best days always lie ahead. He was in inspirational leader who used good humor well and who dealt with adversity with grace.

Rosenberg – John Adams, 2nd President of the United States and a leader in the Boston Tea Party, took a stand against Government bailout of companies and manipulation through unfair use of taxation. Many think this was a stand for freedom, in actuality it was an objection that tea was only sold to merchants favored by the Parliament and this made tea for the colonists expensive. The colonists smuggled tea and in response the English repealed the tea tax making English tea the least expensive, the Bailout of the East India Company. To pay for the expense Parliament passed the Townsend Act putting a tax on tea and other goods. When the Colonies boycotted British products the Townsend act was repealed except for the tax on tea.