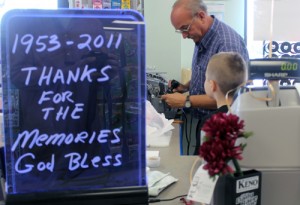 Northborough – An iconic Northborough business for 59 years, O”Brien's 5 & 10, closed its doors for good Aug. 8, according to the store's co-owner Bruce Terry.

Two men broke into the store one night in March 2008 through a locked side door. After stealing cash and scratch tickets, they emptied an aerosol can on the carpet and lit a match. O”Brien's and five other businesses burned to the ground as a result of that act of vandalism and arson.

The store was closed for over a year. At the same time a new CVS Pharmacy in nearby downtown Northborough was under construction, with plans to occupy the area where a multi-store shopping plaza once stood. That new building opened in August 2008.

Customers had become accustomed to buying from other stores in the year O”Brien's was closed, according to Terry. Funds that he and his team had set aside for marketing and advertising were used instead to rebuild and restock. When it reopened, many regular customers did not return to the store, he said. The business never fully recovered from the losses caused by the fire.

“People around here forgot about us,” Terry said. “When we came back, people came in to visit, but they didn's stay. Their shopping habits had changed.”

The fire was not the only factor contributing to the store's closing.

“The fire was devastating to us financially, and when you have a bad economy on top of it, you have a double-whammy,” he said.

Terry had partnered with Sue Wilson to buy O”Brien's in 1996. They had managed the business with their spouses, Linda Terry and Moe Wilson, for the past 15 years. At this point, with the business closed, the owners are hoping to sell the O”Brien's name, which the new buyers could use either at the current location or at another site. They are also in the process of selling off the fixtures that were in the store.

The owners are relying on brokerage and appraisal firm George & Company to market and sell the O”Brien's name. Chris George, the firm's president, cites local competition from “big-box stores” as a reason the business is difficult to sell.

Still, he is confident the name can be sold.

“Right now we have received a lot of interest since we are selling it for a very low price,” George said. “I think we will find an owner for it.”