Shrewsbury – Richard “Dick” Lorman died peacefully Thursday, Aug. 25, 2011 after a courageous battle with cancer. He lived in Shrewsbury after retiring from the U.S. Army.

He is survived by his wife, Jackie, and their four children, Steve, Linda, Dawn Grzyboski and her husband Frank 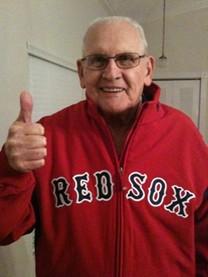 Grzyboski, and Cathy Raymond. He was proud of his grandchildren, Sam and Frank Grzyboski Jr., and Drew and Lauren Lorman.

Mr. Lorman was a 20-year veteran of the U.S. Army and received the Purple Heart after his tour of duty in Vietnam. He moved to Florida after the National Standard/Worcester Wire Company closed. He remained an avid Red Sox fan and a brick will be laid in his honor in January for the 100th anniversary of Fenway Park.

In lieu of flowers, the family requests that a donation be made to the Jimmy Fund in the name of Dick Lorman at Jimmy Fund, P.O. Box 849168, Boston, MA 02284-9168. Arrangements under the direction of Family Funeral Care of Orlando, Fla.