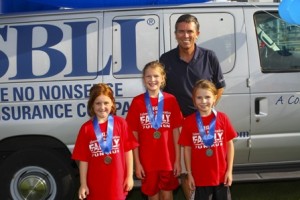 Westborough – While 10,000 runners prepared to hit the roads of Falmouth for its annual road race, the weekend's festivities kicked off Aug. 13 with the 11th Annual SBLI Falmouth Recreation Family Fun Run. Westborough resident, Rebecca Walsh, had an impressive showing, placing first in the second heat of the 8- to 9-year-old girls” race.

More than 500 future world class runners – ranging in age from three to 14 years – got their shot at the gold as they competed in various distance races, beginning with a 100-yard dash for children five and under, a 200-meter race for six- and seven-year-olds, 400 meters for eight- and nine-year-olds, 800 meters for ten- and eleven-year-olds, and one mile for twelve- to fourteen- year-olds. Every participant received an official race T-shirt, a medal, and a “fantasy finish line” photo.

The race marks the eleventh year that the company has sponsored the children's event, established with their sponsorship of the Falmouth Road Race from 2001-2005.