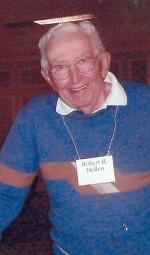 He was born in Marlborough and raised in Hudson, son of the late John F. Hellen Jr. and Mary (Loftus) Hellen, and attended local schools, graduating in 1941 from Hudson High School. He was a U. S. Army veteran of World War II, serving with the 30th Division, 117th Infantry in the European Theatre, which included action in the D-Day +3 invasion and Battle of the Bulge.

Mr. Hellen attended Burdett College of Boston for three years until he and his brother, Donald, went into business as owners and operators of Hellen Transportation Co., which they ran for many years. Later, he was employed as a school bus driver. He transported the students of Sudbury and Concord for many years until his retirement. He also drove a transportation van which was used to transport the employees of Marlborough Hills.

He is survived by his son, Thomas Hellen and his wife Mary Ann of Somerville, and their two daughters, Amanda Hellen of Somerville and Meredith Dziuba and her husband Ted of Malden; his son, Paul Hellen of Hudson; and his daughter, Diane Hellen of Pompano Beach, Fla. He is also survived by his former wife of 31 years and mother of his three children, Ruth (Garvey) Hellen of Berlin, and many nieces and nephews. He was the brother of the late Charles, Donald and John Hellen.

A funeral Mass will be celebrated Saturday, Sept. 17, at 9 a.m., in Saint Michael's Church, 21 Manning St., Hudson. Burial services will be held at a later date. Calling hours will be held Friday, Sept. 16, from 5 to 8 p.m., at the Tighe-Hamilton Funeral Home, Inc., 50 Central Street.