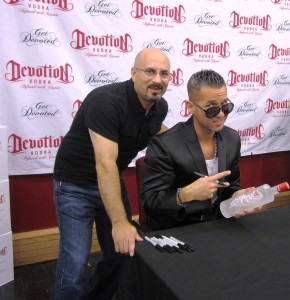 Westborough – Julio's Liquors in Westborough on a normal Friday evening is always busy. But on Friday evening, Sept. 21 it was extremely busy, thanks to the arrival of one young celebrity, Michael “The Situation” Sorrentino and an estimated 900 of his fans. Sorrentino, one of the stars of the extremely popular MTV series, “Jersey Shore” was at the store on behalf of Devotion Vodka, of which he is a brand ambassador.

For each bottle of Devotion Vodka sold that night, Julio's and Devotion pledged to donate $2 to the Pink Revolution, an alliance of groups dedicated to raising funds for breast cancer awareness and supporting those diagnosed with the disease. In turn, each fan got to have their bottle signed by Sorrentino and have their picture taken with him.

Sorrentino is known for not only his participation in the reality series show but also for his propensity to show off his abs. But at Julio's, the only thing he was flashing was a big smile and peace sign for each of his fans, many of whom had been waiting patiently for over two hours for him to arrive. (Sorrentino arrived an hour late for the event, due to being delayed in Friday evening traffic and the inclement weather.)

Ryan Maloney, Julio's Liquors owner, said the night was a tremendous success, in spite of its late start. Everyone in line waited patiently to meet Sorrentino, he noted. And Devotion Vodka gave away two $50 Julio's gift cards in a raffle to thank everyone for waiting, he said.

Sorrentino himself proved to be a gracious guest as well, Maloney added.

“Although Mike was late he stayed and made sure he got to every one of his fans. He even stayed later to take pictures with the Julio's staff and all the police that had helped with crowd control,” he said. “He was truly a gentleman and made sure the evening turned out great for everyone.”

An estimated $1,000 was raised for Pink Revolution.