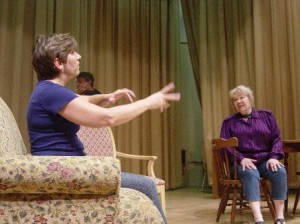 Shrewsbury – During a September rehearsal for October performances of “The Curious Savage,” Holly Dion, artistic and executive director of New Experience Theatre Works (NETWorks), explained her approach to cast members.

“I's going to try and let you go without stopping,” she said.

NETWorks is currently rehearsing the upcoming production, a show Dion described as a comedy-drama written by John Patrick. At present, the cast is trying to get through entire scenes seamlessly, as the show will begin next month in the theater at Southgate on Julio Drive. While NETWorks has been in business since 1990, and most recently used Grafton as its base, the group started calling Southgate home last year. The change has been a great situation for both NETWorks and the facility, Dion said.

“We get a large attendance from those who live here in the facility,” she said. “They come to watch our rehearsals. It's sort of their baby in their backyard. They like to watch it come together.”

How quickly productions come together can vary depending on who is involved, Dion explained. NETWorks is, as she described it, an organization that combines the experience of professional artists with the richness of raw, untapped talent. She holds open auditions for all productions, which in the recent past have included “Harvey” and “You'se a Good Man, Charlie Brown.”

“It's a great way for people to get involved in the theater backdrop,” Dion said, “even just to come and take a backstage role and see what it's like, how theater works.”

NETWorks is a nonprofit organization that donates a share of its proceeds to charities. Over the years, Dion said, organizations that fight homelessness have received donations from NETWorks, as well as a fireman's association fund in the wake of the 1999 fire in downtown Worcester that killed several firefighters.

“I feel it's like one hand washing the other and it really grows the community,” Dion said.