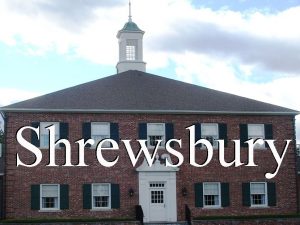 Shrewsbury – Just about everyone in Shrewsbury believes that the town's public library, in its current incarnation, is not suited for present-day needs or for those of future generations. But how best to remedy that situation is causing much debate, confusion and resentment as the town prepares for a special election Tuesday, Oct. 18.

At issue is an $18.47 million proposal to renovate and rebuild the library, of which approximately 53 percent ($7,959,989) would come from a Massachusetts Public Library Construction Program grant. The town's share would be approximately $8.76 million. (The library trustees have committed to raising $1.75 million as well, of which they have already received commitments for $806,000.)

The proposal has already received the voters preliminary support at a Special Town Meeting held Sept. 26; it must next be approved at the Oct. 18 election.

Town Manager Daniel Morgado is quite firm on how this project will be paid for if the vote passes.

“This is a short term note, a 20-year temporary debt exclusion, and is not a permanent override as some have tried to suggest,” he said. “The law (Mass. General Law 59 21C) is very clear on the difference between a temporary exclusion and an override. [This project] is similar to the types of debt exclusions that we have done for other projects such as the Sherwood Middle School and the Floral Street Elementary School.”

In the plan, the original part of the library, which was built in 1903, would be retained. The remaining additions, which were built in 1923 and 1979, would be torn down and replaced. The result would be a 42,000-square-foot building that proponents say would not only meet the demands of future generations, but would also address significant problems the current library is facing, such as a failing heating and cooling system, mold throughout the building and leaking roofs and skylights. The proposed design would also improve interior traffic flow and address compliance issues related to the American with Disabilities Act (ADA).

Library Director Ellen Dolan noted that the cost to rectify the infrastructure shortcomings and make the library ADA-compliant is approximately $6.4 million. According to Dolan, the tax impact of a 20-year bond for a home valued at $370,711 would be $48.02 in year one and $26.41 in year 20. However, she added, that a state grant cannot be used for capital repairs alone.

As for the tax impact of the larger proposed renovation/expansion, Dolan said the cost would be $65.89 in year one and $35.90 in year 20.

“The 18.47 million includes everything,” Dolan said, “including the relocation for the 14 to 18 months that would be needed when the work is being done.”

Hopes for a downsized solution

There are those in town who feel the proposed expansion exceeds both the needs and budget of the town. John Martin is the chair and Brian Austin is a member of the Committee for a Smaller Library.

According to Austin, the project could be reduced by $2.2 million by using medium-height shelving throughout the building. By the group's calculations, an additional $1 million could be saved if the basement area were retained and then reconfigured so all available space could be used.

The men, who both have engineering backgrounds, said they arrived at their figures by using a library-specific program known as the Wisconsin Public Library Standards. The program evaluates the services and resources a community requires when considering a public library project.

Dolan said the 1979 addition is not structurally strong enough to have any additional bookcases installed nor can the existing cases be situated differently than what they are now.

“When the addition was built,” she noted, “the occupancy permit was denied because it was deemed unsafe. They then had to add additional structural beams. Sometimes even now when a small child is running in this area, you can feel the floor move.”

The library staff currently employs the equivalent of 19 full-time employees which, according to Dolan, will remain the same. In the new plan, staff will be situated differently. Presently offices are located wherever space allows, including niches behind book stacks, in closets and away from the areas the staff supervises. In the case of the children's librarian, prep work for children's programs and other special events is done in the same area as some of the building's heating equipment. Cable and electrical wires are located on a wall in one of the library's three restrooms.

Despite the attractiveness of state funding, Austin and Martin believe that “there is no guarantee” that the state will indeed come through with the grant money.

“There are always loopholes,” Martin said. “If it's a tough year for the state [in 2014], it will be tough for the library. The issue is that we will have to pay temporary loans with interest until we get that reimbursement from the state.”

“We are not against a new library,” Austin said, “but the state grant is a carrot. We need to sharpen our pencils and come up with a plan for a smaller library. There's still time.”