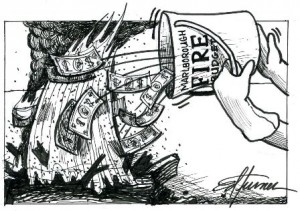 Marlborough – Tensions have been brewing in Marlborough over the last few months among Mayor Nancy Stevens, the City Council and the Fire Department. In June, the mayor temporarily closed down one fire station due to what she said was a shortage of funds in the municipal budget. There has also been a staff shortage, which required the council to make transfers between accounts to pay for overtime costs. Along with these budget items, Fire Chief Ricky Plummer will receive a severance package of $17,500 and the option of having the city cover six months of his health and dental benefits. He had been on the job just over a year when he decided to retire due to health concerns.

Arthur Vigeant and Matthew Jones, the two candidates who are now running for Stevens's position when she steps down in November, have vowed that should they be elected, repairing the relationship with the Fire Department would be a top priority.