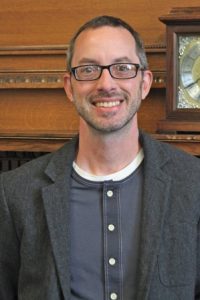 Westborough – Anthony Vaver, Westborough resident and author of “Bound with an Iron Chain: The Untold Story of How the British Transported 50,000 Convicts to Colonial America,” spends his days researching and writing about early American crimes, criminals and punishments. From petty thieves to professional criminals, whippings to executions, Vaver explores the notorious and often colorful criminals of the 18th century.

As a child growing up in Chicago, Vaver loved reading about Al Capone, John Dillinger and other Chicago gangsters. Later, as a student at Cornell College, Vaver's intrigue with crime peaked when he wrote his doctoral dissertation on crime literature in 18th-century England.

Vaver earned a bachelor's degree in English at Cornell, then went straight to graduate school in English literature, earning a Ph.D. at the State University of New York at Stony Brook. Unable to find a job as a literature professor, Vaver went back to school and got a master's degree in library science from Rutgers University, after which he got a job as a librarian at Brandeis University.

“When we do talk about crime in colonial times, we tend to focus on witches and religious blasphemers standing in the pillory,” he said, “I figured that there had to be thieves, highway robbers, and murderers from the colonial period whose stories were just as interesting as their British counterparts. It turns out that I was right.”

When Vaver began researching American crime, he began by investigating the little-known history of convict transportation from Great Britain to colonial America. He was shocked to discover that Great Britain sent more than 50,000 convicts to colonial America between 1718 and 1775. Given the timeframe, this number is huge. The population of Boston in 1765 was only 15,520.

“As I kept researching convict transportation,” he said, “I found that I couldn's stop because I kept finding such interesting material. I decided that the topic was so rich and so little known in America that I had to write a book about it.”

Of all the stories he has researched, Anthony found that of Henry Tufts, “a picaresque character who traveled all over New England and had a colorful life as a burglar, horse thief, doctor, preacher, counterfeiter, con man, soldier, trapper, trader, showman, speculator, fortune teller and wizard” to peak his interest more than any other.

Given the opportunity to meet any character from his book, Vaver would most like to meet petty thief James Bell. Bell stole a book from a bookstall and, after a chase, was discovered hiding out in a dog kennel. He was found guilty of the crime and was transported to America.

“We do not know much about him,” Vaver said, “but the image of him clutching the stolen book in a dog house just resonated with me. I would love to be able to meet him to discover his motivation for taking the book, what he thought about being transported, and what happened to him after he arrived here in America.”

When he is not writing, Vaver enjoys traveling with his family. He loves learning about the history of an area or city, and then hunting down the spots where that history took place. It would not be unusual to find him at the sites of former prisons and other crime-related spots.

Westborough residents would be interested to know that their small town has its own early American criminal celebrity, Tom Cook. Cook, according to town lore, was like Robin Hood in that he stole from rich farmers and generously shared his plunder with poor ones. He was known to be quite calculating and to team up with other notorious criminals.