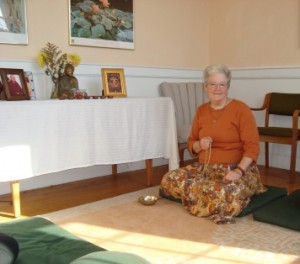 Northborough – Rev. Judith Wright meditates daily. Embodying the giving principles of her longtime practice, the minister at First Parish Unitarian Universalist Church in Northborough started a Buddhist Insight meditation group on site soon after getting hired in 2003. In 2008, as part of a six-month sabbatical, she deepened her awareness of Buddhist meditative traditions by visiting a monastery in Nepal, where she learned from monks. Bringing the teachings of generosity back home with her, she added a second meditation group focused on Tibetan Buddhism. She and a co-leader continue to offer both sessions under advisement from Lama Migmar Tseten, the Buddhist Chaplin for Harvard University.

Initially offering the sessions in part because she needed people with whom to meditate, Wright said she has gained much from the experience.

“It has transformed my life – made me more compassionate, more loving,” she said, “It's a deepening of my call as a minister.”

The Insight meditation group, which is held Sundays from 7 to 9 p.m., is focused on early teachings of the Buddha, including the Four Noble Truths and the Noble Eight Fold Path. These sessions also involve mindfulness and concentration exercises that are done both sitting and walking. People who are unfamiliar with the practice, as well as people who are experienced, are welcome to attend.

The Tibetan Buddhism group meets Thursdays from 7 to 9 p.m. These sessions delve into the Green Tara Mantra. Participants begin with a “simple refuge to the Three Jewels, the Buddha, Dharma and Sanha,” and then create “bodhicitta (the thought of awakening).” Limitless meditations are recited and meditations of “taking and sending on the breath” are performed before beginning the Green Tara Mantra. Next, study of Lama Migmar's book, “Seven Steps to Awakening,” is discussed, followed by any group business. The Heart Sutra and/or the Noble King of Prayers may be recited. Sessions end with the dedication of merit.

Wright believes many participants have benefited from coming.

“Some people get a sense of relaxation, some people develop more mindfulness,” she said. “People have a space to decompress from their week and get ready for their next week, especially Sunday night's group.”

Wright has seen people with deep emotional pain be comforted by the practice.

“There's one person who's been with us about six months and he was in great distress when he came…and it's been a life saver for him. It gives him an anchor.”

“I feel like it's just part of who I am,” she said about leading the groups.

Wright said anyone is free to attend the sessions.

“They don's have to be Buddhist,” she said, “They can be interested in meditation.”

Recalling that the process was one she, herself, opened to slowly, she said those interested in trying it don's have to feel like they have to agree with everything that's being said in terms of the Buddhist philosophy.

“You can benefit from the meditation whether you believe in the Buddhist part or not,” Wright added.

For further information about the groups, visit www.firstparishnorthboro.org or call Rev. Wright at 1-508-393-6422.