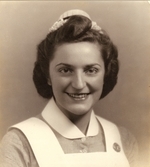 Born in Boston, she was the daughter of the late George and Theresa (Seibert) Hansis. She was educated in Needham schools and was a graduate of the Massachusetts General Hospital School of Nursing in 1939. During World War II, she served with the U.S. Army on the Hospital Ship Mercy in the South Pacific.

Prior to her marriage Mrs. Ward was employed as a Surgical Nurse at Massachusetts General Hospital. She was affiliated with St. Stephen's Episcopal Church, enjoyed all Boston sports, reading and bird watching.

Her funeral service will be held Wednesday, Dec. 7, at 10 a.m., in the Rand-Harper-Pickering Westborough Funeral Home, 62 West Main St., Westborough. Burial will follow in Pine Grove Cemetery. Calling hours at the funeral home are Tuesday, Dec. 6, from 5 to 7 p.m.

Donations in her memory may be made to the Friends of the Westborough Public Library, 55 West Main St., Westborough, MA 01581 or to the Audubon Society, 208 South Great Rd., Lincoln, MA 01773