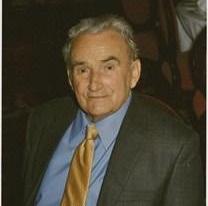 Marlborough – Guenter John Zisler, 76, died peacefully at home Tuesday, Dec. 27, 2011, surrounded by his loving family and friends, after a long illness. He was the husband of Margit Zisler, with whom he celebrated their 50th wedding anniversary this year.

Upon their return to the United States, Mr. Zisler worked as a carpet installer at Emerson Rug, Jordan Marsh and JC Best. In 1968, he founded his own carpet store, Post Road Carpet Center in Marlborough, and then went on to open many other carpet stores and various businesses in the surrounding area. He later began working as a real estate developer.

Mr. Zisler was noted as a man of integrity and honesty who was well-liked in the community not only as a person but as a business man. He and his wife always loved to travel with his family and friends. He enjoyed many fascinating trips, including visits to Europe, Asia, Africa, the Mediterianean, South America and the Caribbean.

In addition to his wife, he leaves his daughters, Korina Peltak and her husband Michael of Marlborough and Monique Zisler-McCabe, and her husband Daniel of Hudson. He was the beloved “Opa” to Rhiana and Natasha Peltak and Alayna and Juliana McCabe. He also leaves an uncle, several cousins, and nieces and nephews in Munich, Germany, as well as family in Portland, Maine.

Funeral services will be held Saturday, Dec. 31, at 10 a.m., from the Duckett-J. S. Waterman & Sons Home of Memorial Tribute, 656 Boston Post Rd. (Route 20), Sudbury followed by a funeral Mass at St. Matthias Church, 409 Hemenway St., Marlborough at 11 a.m. Visitation will be held Friday, Dec. 30, from 4 to 8 p.m., at the funeral home. Relatives and friends are respectfully invited attend.

In lieu of flowers, donations may be made to the Boys and Girls Club of MetroWest, 169 Pleasant St., Marlborough, MA 01752.