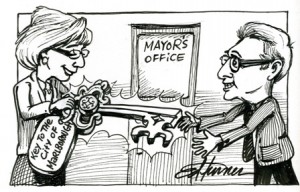 Marlborough – The new year will bring a change in leadership to Marlborough as Nancy Stevens ends her six-year tenure as mayor and hands over the keys to the city to Mayor-elect Arthur Vigeant. But the transition to the city's corner office should not be a difficult one for Vigeant – he has served on the City Council for nearly two decades, including the last nine as council president. Vigeant will be sworn in as mayor in a ceremony to be held at City Hall Monday, Jan. 2.