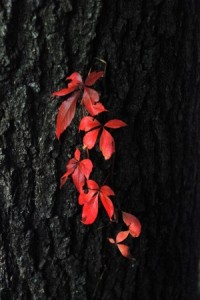 Westborough – The Westborough Community Land Trust (WCLT) has announced that the “People's Choice” photo, determined by the votes of visitors to its photo contest exhibit, was “Splash of Red” by Kaleigh Wright of Westborough. The fall photo was also the second-place winner in the juried portion of the photo contest, organized by a committee chaired by Sharon Williams, who is also a director of WCLT.

“It is interesting to see the agreement between the popular vote and the judges” picks,” Williams said. “Both in this year's photo contest and in WCLT's previous contest in 2007, the People's Choice photo turned out to be one of the winners that the judges had chosen. This year's popular favorite was the second-place winner, Kaleigh Wright's photo of Virginia creeper, and back in 2000, it was Paul Weisbach's photo of a white-breasted nuthatch, which won third place that year.”

Annie Reid, who writes a “Nature Notes” column for WCLT, admires the photos that are submitted each year.

“I's not surprised that the favorites are memorable photos of wild plants and animals that are familiar to people in Westborough,” she said. “These photos capture what we see around Westborough and help to give us a sense of place – of Westborough as our place.”

Williams also announced that the winning photos and many other photos from this year's contest can now be viewed online in WCLT's new digital nature photo gallery. The “Wild in Westborough” photo gallery can be found on the WCLT website at http://westboroughlandtrust.org/gallery.php

Vivian Kimball, another WCLT director, encouraged residents to add their own photos to those displayed on the website.

“The photo fun isn's over,” Kimball said. “Photos are welcome all yearlong on our “Sightings” page on the WCLT website, where people report wildlife that they'se seen in town.