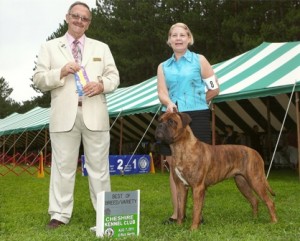 Northborough – Mitzi Gaynor, a 2-year-old red brindle bullmastiff, will be participating in the Westminster Kennel Club Dog Show with her owner, Northborough resident Stacey Gavin. Mitzi has competed in shows since she was 2 months old, and has what Gavin called “ring presence.” She loves the stage.

Mitzi will be participating in the event under the direction of professional handler Sara Gregware when she appears at the event, held at Madison Square Garden in New York City, Monday and Tuesday, Feb. 13 and 14.