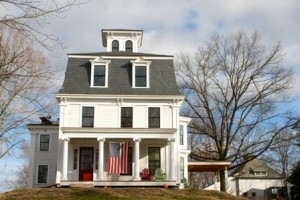 Westborough – While a student at Boston University studying engineering, Michael Fitzpatrick purchased and renovated several properties in South Boston. After graduating, he moved to Marblehead, where he remodeled old historic homes and began making cabinets. Then in 2004, he entered the North Bennet Street School's two-year full-time cabinet and furniture program and, at the same time, opened a furniture shop next to the Boston Design Center with a group of fellow grads.

In 2009, Fitzpatrick and his wife, Jean, decided to move closer to her business, Keamy Eye and Laser Center, which is located in Westborough.

“When we searched for property, we looked in Metrowest for a house in rough shape with a barn,” Fitzpatrick said. “43 Church St. was one that came up in the list and I knew the moment we pulled in the driveway that this was it. I saw this house as a neglected gem that I felt bad for, and worth the love and effort it required. Jean wanted to drive me to the hospital for a psych evaluation but I told her that I had one last house in me, and this was it!”

Renovations began at the Circa 1845 house the day it was purchased in May of 2009. Fitzpatrick put a sign in the yard “43ChurchSt.com” for a website he created when initially fishing for contractors since he had spent the last 25 years on the North Shore rebuilding houses, cabinets, and furniture and realized that Westborough was too far of a commute for contractors he's had long relationships with.

By trade, Fitzgerald is a furniture maker (www.BostonFurnitureMaker.com) but he has taken a hiatus to rebuild this house. As he evaluated the bids and contractor costs he received at the onset of the renovation, he realized that it made sense to do the work himself. He could save a substantial amount, much more than he could make as a furniture maker. The commitment would be more than two years of 60 to 80 hour weeks, but would yield caring hands on all aspects of the new house, a house he could never afford otherwise.

When work started on the house, Fitzpatrick began blogging about the project, not thinking much of it.

“I will diary the process of rebuilding our little piece of history in Westborough,” the blog begins.

“When I began to slack on the blog,” Fitzpatrick said, “I would get emails from folks following the progress asking for updates. I began to feel obligated.”

There are now over 500 entries on the blog with a worldwide following and thousands of hits each month. One month there were 29,000 hits. While updating the blog adds a new dimension to the difficulty of the project, said Fitzpatrick, the feedback and support at times really help move the project forward. In addition, the blog provides a permanent storybook on the Internet to live in perpetuity.

Fitzpatrick said they have about 30 visitors each month who want to take a look at the home. There has been so much interest that they held an open house last summer before the drywall was installed and over 500 people came to take a look (during just one weekend).

The house at 43 Church St. has provided Fitzpatrick with a piece of Westborough history. It surprised him how sophisticated the system was to provide domestic water to the house in 1845. This was in the time of only outdoor wells and outhouses (which they found evidence of next to the barn). There was no inside plumbing. Fitzpatrick discovered an underground outside “cistern,” a 16-foot-long brick room that collected rainwater, removed sediment and supplied another brick holding tank in the basement. It appears to have had a manual pump inside that would pull the water from the cistern and probably a pump in a kitchen area or, possibly, the water was simply retrieved in the basement. This summer he found a 30-foot-deep hand-dug circular rock well that appears to also have fed the system.

According to Fitzpatrick, “All old pictures we’ve seen show no above-ground well. It was all done underground. For the time, this was very cutting edge.”

The discovery of a diary in the walls of the original house is one of Fitzpatrick's renovation treasures. It is in rough shape, though, with serious water and squirrel damage. It needs to be rebound and restored.

“It is legible and has one-line-per-day entries from 1850 to 1860. I have it under press to flatten it,” Fitzpatrick said. “The pages are brittle and it needs expert handling. Paula Skog, former Historical Commission chair, knows more about it than I do.”

The renovations will continue for a few more years, although not as intensely. He hopes to be living in the house in a few months, after some cabinetry is in place and all the code and safety issues are complete.

Fitzpatrick believes that he and his family will be living at 43 Church St. for a long time. He even installed an elevator shaft for a future elevator so he and his wife can live there as long as they are able.

Untitled from sue wambolt on Vimeo.