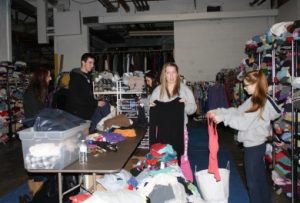 Shrewsbury – From the outside, it looks like an ordinary warehouse; but inside, it looks like a large attic. However, Andy's Attic, as it's called, is not an ordinary attic – it's a 501c3 nonprofit organization run by volunteers. One hundred percent of donations received go directly to its cause. Andy's Attic provides Shrewsbury, Worcester and surrounding area schools and social service agencies with clothing for teenagers in need.

School and social workers identify the teen and then contact Andy's Attic with the gender, size and first initial of the recipient. The identity of the student is strictly confidential. Volunteers then put together an appropriate package usually consisting of a week's worth of clothing, new socks and undergarments, and if possible, a pair of sneakers.

Andy's Attic was created by Lisa Reese in honor of her son, Andy. Andy was a junior at Shrewsbury High School (SHS) when he died in a car accident in December 2010.

“My son, he kind of wanted fairness for all and it always bothered him that some kids didn's have as much,” Lisa said. “He really did try to encourage them and motivate them and tell them they were good and help them realize their potential. He told them to keep going forward without letting obstacles get in the way.

“He did fight for the underdog and he wasn's afraid to put himself out there,” Lisa added. “A lot of kids don's have the courage to do that.”

Lisa said that Andy's Attic is stocked and ready to make more contributions.

“We are going to start work with Worcester North and whoever else needs us,” she said. “It's [the organization has] really been reaching a lot of people.”

Andy's Attic has come a long way since Lisa first started collecting clothing in her Shrewsbury home. A space in a local warehouse was donated to her to help accommodate the growing amount of clothes. To date, the nonprofit has raised over $10,000 and has given 70 bags of items to kids in shelters. In addition to clothes, it now offers toiletries including shampoos, soaps, toothbrushes and deodorants. (There is currently a need for more toiletry donations.)

Andy's Attic has expanded beyond donations to high-schoolers. The organization is also collecting objects needed for college dorms such as bedding, towels and soap dishes.

“City kids who do get into college are usually on scholarships so they get to go to college but they can's buy anything for their dorms. That's the biggest push right now,” Lisa said. “That and sneakers – there is always a need for sneakers, shoes, underwear and socks. There is never enough.”

Lisa believes one of the best parts about Andy's Attic is the group of Shrewsbury students who volunteer to sort, organize and move clothes for the organization. Some have been going there twice a week for over six months. At times, 20 students can be found working in the warehouse.

“It's so great when you can get young kids involved with doing something for the community,” Lisa said.

Allie Schlener, a SHS senior, acts as a volunteer liaison between the high school and Andy's Attic. Schlener explained that the students want to see Lisa's vision become a huge success.

“Andy was a part of everybody's life and everybody loved him. He was always helping everyone and had the most positive outlook on life. Mrs. Reese is keeping that going,” Schlener said.

Gerald “PJ” O”Connell is an assistant principal at SHS and was also one of Andy's golf coaches. O”Connell said he feels that Shrewsbury is lucky to have someone like Lisa in the community.

“Andy was a member of the [current] senior class. He was dynamic, outgoing and had a friendly personality. His passing was a huge loss on the community. Lisa's efforts help students feel like they are making a difference, not only to help others, but in keeping Andy's memory alive,” O”Connell said.

Another tribute to Andy, The Andrew Reese Scholarship Fund, was set up to help kids with college and trade expenses. Andy would have graduated from high school this year. Andy's Attic will be giving out about 10 scholarships to kids in the Shrewsbury community in his honor.

When kids “get these clothes, I wish people could realize what a difference it really does make. These kids will be sitting in class shaking their heads. They can's believe that somebody actually did something like that for them,” Lisa said.

“It's all about keeping your child's memories alive,” Lisa said.