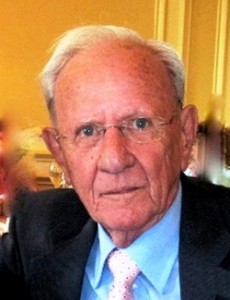 He is survived by his devoted wife, Cathleen L. (Burns) Manning, and their sons Jeffrey and his wife Kristen of Bristow, Va. and Brian of New York. He also leaves two children from his first marriage, Judith Brown and her husband Lawrence of Medfield and attorney Robert Manning and his wife Emily of Beacon Hill; two sisters, Helene Manning and Dolores Greene and her husband Dr. Richard Greene of Worcester; five grandchildren, Colleen Christie, Katelyn Pickering, Katherine Manning, Alexander Manning and William Manning; two great-grandsons; and seven nieces and nephews.

Born Aug. 22, 1926, the son of the late Stanley and Nora (Dowd) Manning, he graduated from Classical High School, attended the University of Massachusetts, and received his Juris Doctor Degree from Boston University. During World War II, he served our country in the United States Navy.

Mr. Manning was a senior partner in Boston's distinguished law firm Angoff, Goldman, Manning, Pyle, Wanger & Hiatt. The son of Stanley Manning, a former Worcester labor leader, he practiced law for more than six decades, and became one of the most highly regarded and trusted union-side labor lawyers in the country.

An advocate for social justice, Mr. Manning believed in the principle that working men and women deserved good wages, decent working conditions, and fair treatment. As a young labor lawyer in the early 1950s, he organized and represented the Vermont Granite workers, most of whom were recent immigrant stone workers from Italy who labored long hours under dangerous conditions. Their struggles profoundly affected him and strengthened his resolve to become a champion for social justice.

It wasn's uncommon for Bob to serve clients for as long as five decades, which included some of the largest, most influential unions in New England, such as Raytheon Corp., General Dynamics (Electric Boat Division), Massachusetts Electric, and New England Telephone. Since the 1960s, he began a 50-year relationship representing public employees including fire fighters, police officers, teachers, public works, and administrative employees. He served many years as the General Counsel of the Massachusetts AFL-CIO.

He earned a reputation for honesty, integrity, and brilliance with a razor-sharp wit. During his career, he tried or settled more than ten thousand grievance arbitrations, negotiated strong labor agreements, resolved bitter strikes, and counseled workers on their rights to form unions and demand workplace justice.

He taught the principles of collective bargaining in classes at the Labor Guild of the Boston Archdiocese and the College of the Holy Cross School of Industrial Relations. For his professional competence, moral integrity and impartial service, the Catholic Labor Guild honored him as one of the first recipients of the prestigious Cardinal Cushing and Reverend Gavin, S. J. award.

Those who wish to remember Mr. Manning by way of a memorial tribute are kindly asked to consider the Boys & Girls Club of Worcester, 65 Tainter St., Worcester, MA 01610 or to The Labor Guild, 85 Commercial Street, Weymouth, MA 02188.

For directions or to leave an online message, visit www.mercadantefuneral.com.