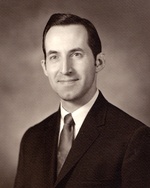 Born and raised in Richmond, Virginia, he attended the University of Richmond on a news carrier scholarship, attended the Medical College of Virginia, (now VCU), and served in the medical corps of the U.S. Navy in World War II.

He met his wife of 59 years, Virginia Ludwig Walthall, a nurse, at a Navy hospital during the war. They later married and moved to New York, where he completed his radiology training at Sloan Memorial Kettering Cancer Center and joined a practice in Springfield.

The Walthalls were long-time residents of Westfield, raising three sons and serving the community in many ways. He was an officer of the Radiology & Imaging group practice in Springfield, which grew from four partners to 34 by his retirement in 1995. He also served as secretary and president of the Connecticut Valley Radiological Society for many years.

Mr. Walthall was particularly happy to help the children at the Springfield Shriners Hospital over the full course of his career. Church groups, the Rotary, his college fraternity, and many medical societies benefited from his loyal participation. He had a green thumb in his rose garden, loved to swim, and was completely dedicated to his love, Ginny, and his to his family. He took special joy in all nine of his grandchildren.

His parents, W. Warren Walthall Sr. and Alice Ramos Walthall, and younger siblings James B. Walthall and Mary Ellen Brooks, all of Richmond, predeceased him.

Memorial donations can be made to the Parkinson's Disease Foundation (https://support.pdf.org/) or Shriners Hospitals for Children in Springfield, 516 Carew St., Springfield, MA 01104.