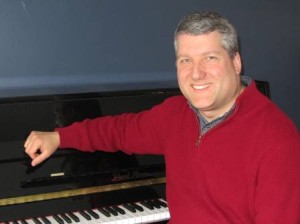 Westborough – Not only is Mike Smith, of Westborough, associate director of admissions for the UMass Family Medicine residencies in both Worcester and Fitchburg, but he is also a founding member of the Boston Chapter of the Nashville Songwriters Association International.

Smith has been song-writing since his Bowdoin College days and was signed in the mid-1990s to a music publishing contract (as a writer) with Critique Music Publishing in Winchester (no longer in business). Most of the songs he has written have been in the country-pop genre, but there is an occasional parody in the mix. Songwriting has always been more of a hobby for Smith, something he has been doing for about half of his life.

In 1996, Smith hit the country music airwaves with “Buy Wynonna,” his first musical parody, which he wrote to the tune of “My Sharona,” a 1979 hit single by The Knack. He said that he literally heard “My Sharona” mere minutes after hearing a new Wynonna tune and realized that it was one of those inspired moments – he figured that if he didn’t act on the coincidence first, someone else would make the connection before him. With permission from The Knack, Lakeside Productions in Nashville, Tenn., recorded the song.

“Writing lyrics was always a natural fit for me,” Smith said. “While I usually write music and lyrics for my own songs, the beauty of parodies is that the music is done for you, although not always the arrangement.”

As a government and history major at Bowdoin, Smith has followed presidential elections since the 80s. He likes to visit Manchester, N.H, with some old friends every four years on the eve of the primary to check out and be part of “the action.” They often get tickets to attend a results-watching party hosted by Dan Rather (one of his friends lives in Salem, N.H.) and then peek in at the candidates’ headquarters to hear some of the speeches. This year they were interviewed by the satellite radio station POTUS while they were stopping in at Gingrich headquarters. Smith's 9-year-old son, Aaron, is growing up to be an aspiring political junkie just like his dad.

Smith's jaunt to New Hampshire inspired his most recent parody, “Political Kicks,” set to the tune of “Pumped Up Kicks.” For “Political Kicks,” Smith came up with the idea and wrote all of the lyrics, but the recording and vocals were done by musicians based in Nashville who he works with on occasion.

When he is not working, writing songs or parodies, Smith enjoys listening to both pop and country music. He is a record collector and trivia buff. He even had the good fortune to be a member of the team Mill Pond Parents Group, that won the 2010 Westborough Trivia Bee. Smith also enjoys reading biographies of all kinds and is involved with the Beth Tivkvah Congregation synagogue and his son's Cub Scout den.

As for the possibility of writing more parodies, Smith said, “when inspiration strikes, I’ll do it. My son, Aaron, and I did one together called “Fenway Park Rock” recently for a Red Sox contest, too. “Buy Wynonna” and “Political Kicks” could not be more different in genre and style and I have to think the next one could be anything.”

Smith said that he has some level of frustration with the gridlock in Washington, but recognizes the ability for real positive change to take place. He plans to pick up his kids after work tonight and taken them with him to Mill Pond School, where he will vote (Aaron, he said, is particularly excited to see what it's all about).

“The reason I used the accompanying graphic that I did for Political Kicks song (the one that says VOTE) is because I sincerely believe we should exercise that privilege,” Smith said.