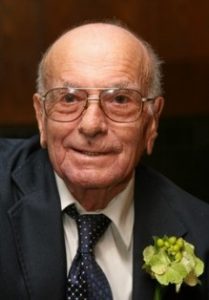 He will lovingly be remembered by his devoted wife of 67 years, Bienvenida “Minnie” (Luna) DiPilato; his children, Nicholas DiPilato Jr. and his wife Marsha of Shrewsbury, Rose Marie Rine of Jacksonville, Florida,with whom he lived, and Mathew DiPilato and his wife JoAnn of Amherst, N.H.; his brother, Libro DiPilato and his wife Lena of Shrewsbury; eight grandchildren, Kristin Anthony and Jonathan Rine, Sara Lamey and her husband Thomas, and Lisa, Maria, Erik and Amy DiPilato; three great-grandchildren, Jonathan Rine and Nicholas and Shannon Lamey; numerous nephews, nieces, extended family and friends.

Born in Worcester, he graduated from Commerce High School and lived 31 years in Shrewsbury before moving to Florida permanently in retirement in 1994. he was a veteran of World War II, serving in the Army Air Corp in Puerto Rico where he met his wife, “Minnie.”

He was a member and past President of the Frohsinn Club of Shrewsbury, founded the Frohsinn Club Scholarship Fund, and was a member of St. Anne's Parish in Shrewsbury. He was an avid golfer at the old Oxford Country Club and an exceptional candlepin bowler. In 1965, he won the prestigious Telegram & Gazette Candle Pin Tournament and was a leading bowler for the Mt. Carmel church team in the 1950s through the 1970s.

Mr. DiPilato worked for over 20 years for Granger Construction Company as a field superintendent, completing many landmark Worcester area projects during that time. He worked as a general superintendent for 10 years for Gilbane Building Company of Providence, completing several major projects in Boston and Miami, including the 53 State St. office tower in Boston and the Burger King Corporate Headquarters in Miami. He retires to Miami in 1990.

Funeral services will be held Thursday, March 8 from the Mercadnate Funeal Home & Chapel, 370 Plantation St., Worcester, with a Mass at 10 a.m. in St Anne's Church, 130 Boston Tpke. Burial will follow with military honors at Worcester County Memorial Park of Paxton. Friends and relatives are invited to visit with the family Wednesday, March 7, from 4 to 7 p.m., in the funeral home.

In lieu of flowers, memorial contributions may be made to St Anne's Church Free Medical Clinic, 130 Boston Tpke., Shrewsbury, MA 01545.