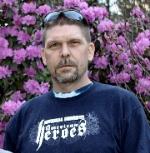 Born in Marlborough, he was the son of Sylvia (Tervo) Wheeler of Berlin and the late Donald Wheeler, who died in September 2011. He was a 1984 graduate of Assabet Valley Regional Technical High School and had spent the last 30 years as a mechanic in the family business, Wheeler's Garage of Berlin.

Mr. Wheeler looked forward to the summer months on Martha's Vineyard, clamming and fishing with family and friends. He also enjoyed snowmobiling, cooking, watching movies, and television, but most of all cherished the times he spent with his family.

Besides his mother, he is survived by his former wife, Sandra (Floyd) Wheeler of Virginia and their daughter Felicia Wheeler and her fiancé, Brian Lowe of Berlin; his daughter, Ashley Wheeler and her mother, Stephanie LaPointe, both of Lunenburg; his brother, Robert L. Wheeler and his wife Beverly of Berlin; and his three sisters, Claire Pond and her husband Kevin and Patricia J. Lichwell and her husband David, all of Berlin, and Crystal Rice and her husband Robert of Ashland. He is also survived by his nieces and nephews, Meggan and Mollie Wheeler, Kyle and Patrick Lichwell, and Bobby Rice Jr.; his great-niece, Alyssa Goulet, and his many aunts, uncles and cousins.

Relatives and friends are invited to attend a funeral service Wednesday, March 14, at 11 a.m., at the Tighe-Hamilton Funeral Home, 50 Central St., Hudson. Burial services will be held in North Cemetery of Berlin at the convenience of the family. Visiting hours will be held Tuesday, March 13, from 5 to 8 p.m., at the funeral home.

In lieu of flowers, expressions of sympathy in his memory may be made to the Jim Wheeler Fund, c/o Clinton Savings Bank, 35 Central St., Berlin, MA 01503.