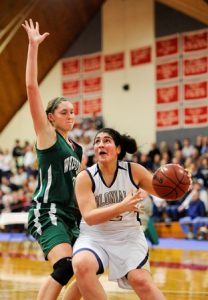 Shrewsbury – Shrewsbury High School (SHS) senior forward Danielle Deraney (#22, right) tries to drive around Wachusett Regional High School (WRHS) senior forward Bri Schnare (#3, left) during their Central Mass Division I semi-final game at Clark University in Worcester March 8. Second-seeded SHS hosted third-seeded WRHS.
SHS got out to a quick start and it took until 3:34 remaining in the first period for WRHS to score its first basket. SHS's dominance continued in the second period and the half-time score was 21-8, in favor of SHS. However, WRHS opened the third period with a 7-0 run, and started the fourth with a 10-1 spurt, and with 1:52 remaining in the game, WRHS took the lead for the first time, 31-29. SHS had a chance to go ahead by one with 12.6 seconds left but couldn’t make it drop and WRHS's Alyssa Lanpher nailed two foul shots to put WRHS up by 3. A final SHS play with 9.6 seconds left missed its mark and the game ended at 35-32.