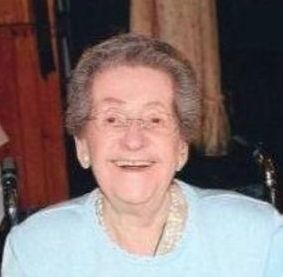 Born in Marlborough, she was the daughter of the late Zenon and Eugenie (Coutier) Desjardins and the wife of the late Armand Buisson, who died in 1977.

Mrs. Buisson had been employed as a baker in the food service program at Marlborough High School. She had also been employed many years ago at the former Allen's Dept. Store in Marlborough.

She had been active at the former St. Mary's Parish, where she was a member of the Assumption Guild, and a longtime choir member. She held the position of Past Recorder for the Women of the Moose Lodge and, in 2004, was honored by the City of Marlborough as Senior Citizen of the Year.

She is survived by her sons, Paul Buisson and his wife, Ann, of Cranston, R.I. and Donald Buisson of Sunrise, Fla.; her daughter, Lorraine Lesieur of Marlborough; 11 grandchildren; 26 great-grandchildren; and one great-great-grandchild. She was also the sister of the late Professor Lucien Desjardins, Gertrude Marsan, Leona Desjardins, Madeleine Koziara, Marie Jeanne “Mary” Luz, and Theresa Dupree.

A funeral Mass will be celebrated Tuesday, April 10, at 10 a.m., at St. Bernadette Church, 266 Main St. (Route 20), Northborough. Burial will follow at St. Mary's Cemetery on Beach Street in Marlborough. Visiting hours will be held Monday, April 9, from 4 to 7 p.m., at the Slattery Funeral Home, 40 Pleasant St., Marlborough.