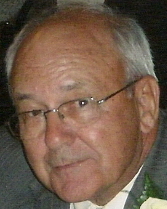 Northborough – Bernard “Ben” R. Dargie, 79, passed away Saturday, April 14, 2012 at the Ichabod Washburn Hospice Residence with his family by his side.

He leaves his loving wife of 55 years, Mary (Rutcho) Dargie; four children, David Dargie and his wife, Mary, of Waterford, Conn, Beth Powers and her husband, James, of Shrewsbury, Joseph Dargie and his wife, Julie, of Upton, and Bernard Jr. and his wife, Jean, of Westborough; 12 grandchildren; and several nieces and nephews. He was predeceased by his brother, Robert Dargie.

Born and raised in Southbridge, son of the late Joseph O. and Lillian (Swanson) Dargie, he graduated from Mary E. Wells High School in 1950, served his country in the U.S. Air Force during the Korean War, and graduated from Worcester Junior College and attended Clark University.

Mr. Dargie worked as an accountant/controller in the construction industry his entire career, retiring in 1993. He was a member of the Knights of Columbus, and enjoyed skiing, hiking, boating, and traveling to Alaska. He was a member of St. Rose of Lima Church in Northborough.

He enjoyed 18 years of retirement as a devoted husband to his wife, Mary, and had been a great influence in the lives of his children and grandchildren. He spent his winters skiing at Mt. Wachusett and also taking ski trips with his family up north. He enjoyed his summers working as a starter the last several years at Juniper Hill Golf Course in Northborough, which he always looked forward to the opening of the season. He loved spending time with his family, especially his summer vacations up at York Beach, Maine.