Community Advocate
How can the Community Advocate help you promote your business?
Advertising Info
Suggest a Story
Free Subscription
Home Business On the lookout for new businesses
Facebook
Twitter
Email 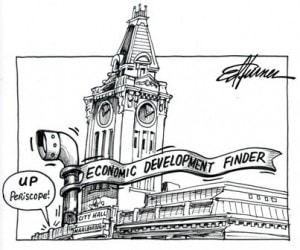 Marlborough – Like officials in neighboring communities, Marlborough's Economic Development Corporation is searching for ways to bring new business to the city in order to reduce the tax burden on residents.

The city's Finance Committee recently approved the transfer of $200,000 from the Economic Development account, which is funded by a hotel rooms tax, to fund new initiatives focused on attracting additional economic activity.

Proposed new initiatives include: (1) increasing sports tourism spending, (2) buying customer relationship software to create a database on area businesses, and (3) creating an “urban village” at the eastern end of Route 20.

Proposal #2 would allow officials to track information about local businesses, as well as those in surrounding towns, including such data as the expiration dates of their leases. This would allow Marlborough representatives to retain existing businesses while enticing others to relocate to Marlborough.