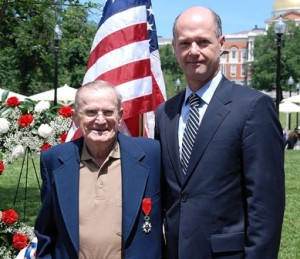 Hudson – Lifelong Hudson resident Edward P. Karvoski Sr., an Army veteran of World War II, received the Legion of Honor Medal during Lafayette Day Ceremonies held May 18 at the Massachusetts State House. The medal was presented by Christophe Guilhou, the Consulate General of France, who explained the significance of the honor at the ceremonies.

“Established in 1802 by Emperor Napoleon Bonaparte, the Legion of Honor is exclusively awarded in cases of exemplary military and civilian services,” Guilhou said. “It is the highest honor in France.” 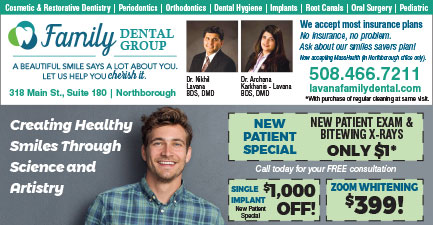 Prior to the medal presentation, Karvoski received a written statement from the Embassy of France in Washington, D.C., informing him he had been appointed a Chevalier (Knight) of the Legion of Honor.

In early 1944, Karvoski joined the 36th Armored Infantry Regiment of the Third Armored “Spearhead” Division. He had just turned age 19 when his division took part in the Marigny-St. Lo breakthrough, the fighting around Mortain, the closing of the Falaise Gap, and the drive across Northern France. His unit was the first one to reach the northern regions of France.

The Lafayette Day Ceremonies continued with a procession from the State House to Boston Common, where a wreath was laid at the Lafayette Mall Monument.