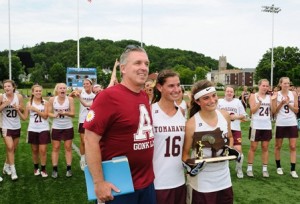 Top-seeded Algonquin hosted second-seeded Westborough at Foley Stadium in Worcester. WHS, the four-time defending champs, had been 9-0 against ARHS before this season. However, ARHS defeated WHS twice this season in close games and so the expectation was that this was going to be a tough game.
WHS scored first with a goal by sophomore Olivia McGourty. ARHS's senior Carly O’Connell then scored two to give ARHS the early lead. The first half ended 4-4.

Fourteen seconds into the second half, ARHS senior Laurie Finelli scored and Algonquin's defense clamped down, only allowing Westborough to score one more time while tallying two more of their own. The final score was ARHS 7, WHS 5.
ARHS now moves into the State semi-finals with a game against Longmeadow High School June 12 in East Longmeadow.