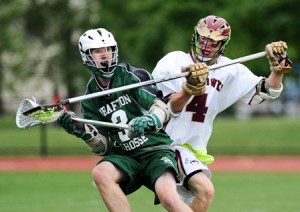 As was typical during the season, ARHS fell behind after GHS's Bryan Rotatori scored first. ARHS's Davis Kraft answered a short time later, but ARHS never led until the fourth quarter; the team was down 6-7 at the half.

Algonquin's defense stepped up in the second half and allowed only two goals. On the offensive side, sophomore Mike Wood scored to go ahead 9-8; ARHS tallied two more to win their second Central Mass Division 1 title. ?ARHS's next step was to play Minnechaug Regional High School in the State semi-final June 12 in East Longmeadow.