Region – Today is Wednesday, July 11, the 193rd day of 2012. Do you feel more crowded lately? If so, you'sl be interested to know today is World Population Day, a day initiated by the Governing Council of the United Nations Development Programme to raise awareness of global population issues.

Nowadays politics can be nasty business but at least it hasn's gotten as bad (yet) as it was on this day in 1804 when the Vice President of the United States, ?Aaron Burr, fatally shot his political enemy, the former U.S. ?Secretary of the Treasury, ?Alexander Hamilton. As the matter was considered an “affair of honor” not only was Burr not charged with murder, he was allowed to finish out his term immune from prosecution. 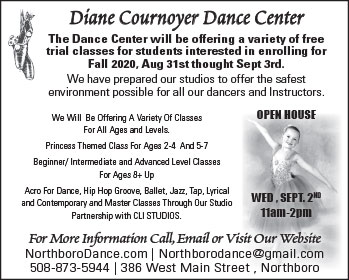 On this day in 1914, one of the greatest baseball players ever, George Herman “Babe” Ruth, made his major league debut. Ruth pitched seven innings to help the Boston Red Sox beat the Cleveland Indians, 4-3.

And on this day in 1960, one of the great classics of American literature, To Kill a Mockingbird (by Harper Lee) was published.

1.? Most kids love bugs! Here's a chance for them to learn more at the Northborough Library to learn more about the creepy critters this Thursday, June 12. (Please note – pre-registration is required.)

2. Is there anything more disgusting than ticks? But unfortunately not only are they nasty, they can also be dangerous. A presentation at the Shrewsbury Senior Center on Thursday, July 12 will help you be prepared against ticks and what to do if you do get bit by one.

3. There will be two fun productions in Hudson this Friday, July 13.

4. Westborough residents are invited to partake of a summer concert this Friday evening, July 13 at the beautiful Bay State Green.

5. Here's a great story about a Northborough man who helps kids find their inner “rock star.”

6. One of the most frustrating things local municipalities must do is deal with unfunded state mandates. Now, several communities are banding together to try to determine how to best do this without incredible financial jeopardy.