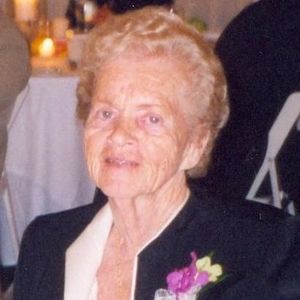 Mary was born on May 15, 1927 in Quincy. She was of one twelve children born to the late John J. and Margaret Louise (Kennedy) Lane. She was a graduate of Natick High School, class of 1945 and later graduated from Wilfred Hair Academy in Wellesley. She worked in the office for Dr. Factor in Cambridge and later worked as an assistant teacher at her sister-in-law's preschool, Brentwood Hall in Hudson. After marriage to Henry W. Harrington on February 19, 1949 she then stayed at home to raise and educate her children. They lived in the communities of Holliston, Hudson and Southborough before settling in Sudbury where they lived over 30 years. While in Sudbury they maintained a farm in which they raised Appaloosa horses. She was active in the 4-H club and horse shows. They moved to Shrewsbury in 2001.

Mary loved to garden. She had a passion for her flower and vegetable gardens. She also created her own fishpond and waterfall in their yard. Working in her yard gave her satisfaction and it became a sanctuary for the many wildlife and birds. She and Hank also travelled extensively and Mary will be remembered as a fantastic cook. She took pride in teaching her grandchildren to swim and she loved to sing and dance. Often with family, close and extended, they would sing the wonderful ballads of ancestral music of their much loved and native Ireland.

Family and friends will honor and remember Mary's life by gathering for calling hours at Heald & Chiampa Funeral Directors ~ The Sumner House, 5 Church Road, On the Common, Shrewsbury Center on Sunday, July 15th from 4:00 p.m. to 8:00 p.m. and again at 8:45 a.m. on Monday morning before leaving in procession to Saint Mary's Church, 640 Main Street, Shrewsbury, where her Funeral Mass will be celebrated at 10:00 a.m. Burial will follow in Saint Patrick Cemetery, Natick.