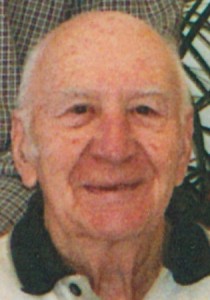 Shrewsbury – Harvey H. Poulin, 92, of Shrewsbury Green, passed away Wednesday, July 11, 2012 after a recent illness. He was predeceased by his wife of 54 years, Florence (Lavallee) Poulin, who died in 1997. He was also predeceased by his brothers, Leon Poulin Jr. and Robert Poulin, and a sister, Gladys (Poulin) Cloutier.

Mr. Poulin was born Feb. 11, 1920 in Worcester, a son of the late Leon P. Poulin and the late Angelina (Perron) Poulin. He graduated from Auburn High School in 1938, and served in the Army Air Corps during World War II.

He worked as a machinist for Wyman Gordon for 41 years in the Worcester plant and was a member of St. Anne's Parish in Shrewsbury. He and Mrs. Poulin were members of the Shrewsbury Senior Center, where he enjoyed playing whist, pitch and bingo. He also swam and walked at the YMCA.

A funeral Mass for Mr. Poulin will be held Saturday, July 14, at 11 a.m., in Saint Anne's Church, 130 Boston Turnpike, Shrewsbury. Burial will follow in Worcester County Memorial Park, Paxton. The family will receive guests at the Britton-Shrewsbury Funeral Home, 648 Main St., Shrewsbury, on Saturday, July 14, from 9:30 to 10:30 a.m.

In lieu of flowers, memorial contributions can be made to Alzheimer Association, 311 Arsenal St., Watertown, MA 02472.

Please visit www.brittonfuneralhomes.com to share a message of condolence with the family or for more information.