On this day in 1992, Jackie Joyner-Kersee became the first woman ever to win two consecutive Olympic gold medals in the heptathlon. Her 1992 win was in Barcelona and her previous win was in Seoul in 1988.

?And on this day in 1776, the Declaration of Independence was officially signed. (The wording was approved on July 4, 1776.)

1. Here's information on a fun wiffle ball tournament to be held in Shrewsbury Saturday, Aug. 4, that will benefit a tremendous organization helping families cope with cancer.

?2. Tatnuck Bookseller will host an author event for “Fenway Park, Images of America” from 10 a.m. to 12 p.m. in the event room this Saturday, Aug. 4.

?3. The First Federated Church in Hudson will be holding a community-wide Family Fun Night Saturday, Aug. 4, from 5 to 8 p.m.

?4. Here's a great story about two Westborough brothers who have found a unique way to help other kids in need.

?5. Don's miss this story of how the Southborough firefighting community is coming together to help the family of one of their own.

?6. We continue to get notices of locals who have achieved success in college. If you would like to have your student's achievement acknowledged please send the information to Kathy Behan, managing editor at [email protected]. ?? 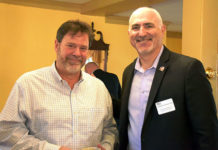