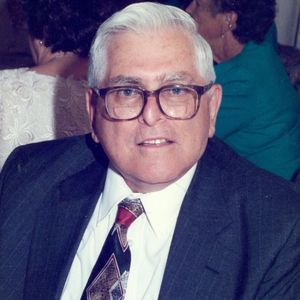 Jim was born Aug. 9, 1925 in Worcester, son of the late Charles C. and Elizabeth (Howe) Alvord. He was raised in Worcester and moved to Shrewsbury in 1952. During World War II, while attending the Boys Trade School in Worcester, he was drafted by the U.S. Army. During his tour of duty in Europe. he served as a machine gun operator. He was wounded in action and was awarded the Purple Heart.

Jim was chosen to be part of a project in which local veterans provide an oral history of their time spent in the military during wartime.

As part of the Clinton family tree, Jim had a strong connection with American history. George Clinton served as Vice President of the United States under Presidents Thomas Jefferson and James Madison.

Jim spent his entire working career as an engraving pressman at Woodbury and Company in Worcester, retiring in 1987. It is at Woodbury that he met the love of his life, Dorothy Foley, with whom he would spend the rest of his life. The two were married in 1950.

In his youth, Jim enjoyed bowling, but later, he could mostly be found tinkering with automobiles or building things, including additions on his home. There was a family saying that made Jim so proud: “If Jim can’t fix it, it can’t be fixed!”

Jim was a Past President of the Shrewsbury Historical Society and a member of the Ray Stone Post 238 of the American Legion.

In addition to his wife, Dorothy, he leaves a daughter, Patricia A. Dzaugis and her husband, Lawrence, of Villa Ridge, MO; a son, J. Clinton Alvord Jr. and his wife, Bonnie Kenderdine, of Framingham; three grandchildren, Alyissa Dzaugis of Somerville, Chelsea Dzaugis of Villa Ridge, MO, and Nathan Kendrick Clinton Alvord of Framingham; and one nephew. He is also survived by close family friend and “daughter-in-love,” Linda Swift of Shrewsbury. He was preceded in death by a sister, Marjorie Farr.

Funeral services will be private.