Shrewsbury – Prospect Park in Shrewsbury offers 70 acres of walking trails, gardens and space for passive recreation. Located between Prospect Street and Boylston Street (Route 140), the property is developed and maintained by the Friends of Prospect Park Inc. For those who frequent the park, remnants of an old stone foundation and once-lush gardens are subtle reminders of the rich history of the site, along with its home and people.

The land currently known as Prospect Park was sold in 1912 to Matthew J. and Gertrude (Clarke) Whittall as a 100-acre parcel consisting of 70 separately owned pieces of property on top of Meetinghouse Hill. Matthew was an internationally known carpet manufacturer. The couple built a “great white Georgian summer estate,” which they named Juniper Hall, on the property, for $80,000. On top of Meetinghouse Hill (the highest point in Shrewsbury), with sprawling views of Lake Quinsigamond, the hills of Paxton and Rutland and even Mount Monadnock and Mount Wachusett, the estate boasted four fireplaces, a music room, a reflecting pool and a two-story reception hall. Along one side of the house was a huge sun porch overlooking a sea of elaborate and extensive formal gardens full of wild irises and wisteria and “picking flower” gardens. Because the gardens were open for public viewing, the estate became one of the premier show places of Worcester County, with people traveling from far away to see the flowers in bloom. Lilac week at Juniper Hall drew the greatest crowds of all.

On Oct. 31, 1922, Matthew passed away at Juniper Hall. In his memory, Gertrude named the pergola in the gardens “The Garden of Sweet Remembrance.” On the fifth anniversary of Matthew's passing, Gertrude deeded Juniper Hall and all the real estate to the Grand Lodge of Masons of Massachusetts. Matthew had been a 33rd-degree mason. It was her wish that the house be used for the relief of suffering. Juniper Hall became known as the Masonic Hospital.

“The magnificent $200,000 Whittall estate which was deeded October 29th in trust to the Massachusetts Grand Lodge of Masons, by Mrs. Gertrude (Clarke) Whittall, widow of Matthew J. Whittall, in memory of her husband, to be used for the relief of worthy and indigent Freemasons, their widows and dependents residing in the commonwealth of Massachusetts, will be dedicated at a special communication of the Grand Lodge to be held on the premises at 3:30 P.M., Memorial Day, at which time the keys to the estate will be turned over to the master and wardens of the Grand Lodge.” (from a scrapbook found in the Shrewsbury Historical Society collection.)

The estate was bought by the town of Shrewsbury in 1976 and in 1979, the building was demolished. For those who visit the park today, there are visible reminders of the Juniper Hill estate and the lavish gardens that once graced the property and attracted visitors from afar. Nestled within the stone walls, which were once home to flowing gardens and an elegant reflective pool, remnants of lives once lived there remain. Here, too, though time and nature have made their mark, the pergola, a piece of history, remains “The Garden of Sweet Remembrance.”

The Friends of Prospect Park host “work events” the second Saturday of each month from March to November, 9 a.m. to noon. Anyone interested in helping to preserve and maintain the park is welcome to attend. Workers meet at the main entrance.

Anyone wishing to make a financial donation is asked to send to: Friends of Prospect Park, Inc. PO Box 52, Shrewsbury, MA 01545. 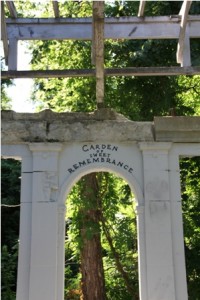