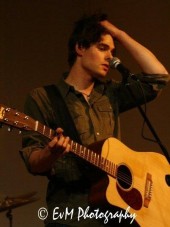 The concert is free to the public, but there is a suggested donation of $5 per person or $20 per family to compensate the performers.

With a colorful three-octave vocal range and music that weaves gracefully between classical and blues, Nakoa's unique rock sound has been compared to that of Jeff Buckley and Paul McCartney.

Raised on a small farm in Upstate New York, his talents took him throughout the Catskill and Adirondack mountain regions and ultimately landed him a scholarship to Berklee College of Music in Boston. At Berklee, Matt thrived in many musical styles, and worked with acclaimed artists, including Grammy-winning country singer Kathy Mattea and audio engineering legends George Massenburg (Billy Joel, James Taylor) and Elliot Scheiner (Sting, Eagles, Aerosmith).

Nakoa has appeared at major universities, sporting events, festivals, and clubs throughout the United States. He can currently be seen weekly at Brandy's Piano Bar in New York City and on the road in a city near you. Also, his full-length debut album, “Light In The Dark,” is now available on iTunes and at his official store, http://www.nimbitmusic.com/mattnakoa.