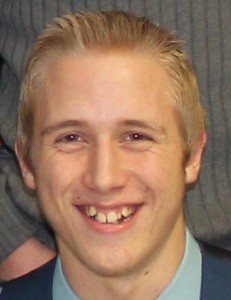 Notable Stats: Ran for 1,189 yards with 10 touchdowns last season, all while sharing hand-offs with the league leader in rushing yards, Nate Costello.

What are your earliest football memories?

“In eighth grade, I remember walking up to the locker room with my friends, and one of us would always scream out “Football!” as loud as we could. Then everyone else would yell it back, and this would continue until one of my friends would jokingly yell “Golf!” This would always crack the rest of us up.

“Another memory is my first touchdown in eighth grade. I was playing wide receiver, and I only got two passes all season. One for a minimal gain, and the other was deep down the sideline for a touchdown. I was terrified I's drop it, but luckily I didn's.”

What were the first couple years of playing high school football like? Who were some of the older guys who helped you out?

“My first couple years were a little weird. Freshman year, I was flip-flopping between the freshman team and junior varsity. Therefore, I could only play half of the freshman games. Because of this, I didn’t really get to know many of the other freshmen players, and wasn's sure how we's all fit together position wise. I started at receiver, then was moved to fullback, and eventually tried out quarterback. My playbook was constantly changing, and I didn's know what I was doing on half the plays. Luckily for me, the other players would help me out, most of the time.

As far as some older teammates who helped me out, the one that sticks out in my mind is Thiago Machado. He was the starting junior varsity fullback when I was a freshman, and I learned everything I knew about the position from him. Once I made varsity, the whole team was really great with helping me out. They probably had more confidence in me than I had in myself.”

What's it like to finally be a senior leader on the team?

“To be a senior is pretty neat. I’m good friends with a lot of my teammates, and I's able to help out some of the younger guys. It's a huge difference from my freshman year, when I was kind of scared to speak up, and didn's want to get hit by the older players. Now I love hitting, and getting hit, and I want to teach our younger guys to feel the same.”

What's your relationship with Coach McCann like? How has he encouraged you to succeed?

“Coach McCann has encouraged me to succeed academically more than anything. By instituting mandatory extra-help sessions, he's made it very clear that academics come before football. On the field, he's helped me with my confidence, always making sure to build me up before games and practices. He's especially helped me with my summer lifting, so each season I come back stronger.”

What has been the single most special game in your football career?

“Last season, our playoff game against Littleton was probably the most special game up to this point. Aside from me, and one lineman, all the starters were seniors. Regardless, it was just as special for me as it was for all them. Going into the season I wasn’t supposed to start. The starting fullback was supposed to be Dylan Zona, who ended up breaking his collarbone in the second game of the season. Going into the Littleton game I really wanted to win for him, and the entire senior class. And when we won, it was one of the best feelings in the world.”

What other sports/activities do you participate in aside from football?

“I take part in an excess of activities and clubs, including wrestling, track and field, National Honor Society, Student Council, Business Professionals of America, and the Guidance Advisory Committee. Outside of school I practice parkour [extreme free-running].”

Have you considered any colleges yet? Would you like to play football at that level?

“I haven’t narrowed down college choices yet, but I's looking to further study mathematics. So far, I's interested in Westfield State University and Lesley University. I would like to play football at the college level, and am currently putting together my scouting profile.”

Which basically answers my next question: what is your favorite class in school?

“Yes, it does. My favorite class in school would have to be math. This is because I find it to be practical, and there's always a definitive answer.”

Who is your favorite professional football team/player?

“My favorite NFL team is the Patriots for two simple reasons; I’m from New England, and my favorite player is a Pat. That would be Wes Welker, because despite being 5’9″, he's still a successful starting wide receiver. I find that to be amazing, because he goes up against guys twice his size, regularly, and still has the passion to play.”

What would you like your legacy at Assabet to be?