How can the Community Advocate help you promote your business?
Print Ads
Web Ads
Digital Marketing
Home People and Places Driving for a cure in Shrewsbury
Facebook
Twitter
Email 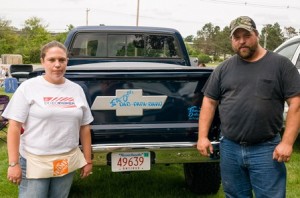 Shrewsbury – Spencer resident and Leicester-Spencer Eagles member Shelly Travers (left) poses in front of her show truck along with her brother, Holden resident Donny Doherty, during a car show at the Hebert Candy Mansion to benefit the Brain Aneurysm Awareness Foundation Aug. 19. The event, which attracted about 50 show cars, is the second annual show Travis has organized to benefit the foundation after her father, Donny Doherty, passed away in 2002 from a brain aneurysm. She has had a brain aneurysm herself and her brother has had two.