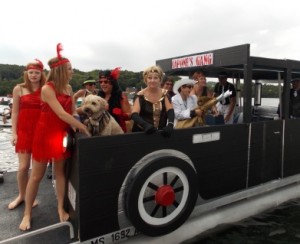 Shrewsbury – The waters of Lake Quinsigamond came alive with the sounds of laughter and music Saturday, Sept. 1 as fifteen motor boats participated in a boat parade sponsored by the Lake Quinsigamond Watershed Association (LQWA). Joining them on the lake was a host of other vessels who enjoyed watching the parade on the slightly overcast but comfortably warm day.

Entrants were instructed to decorate their boats by illustrating their choice of a particular decade. Decorations included boats that looked like cars from prior years, military tanks, a hippie-inspired theme, a tribute to “70's Southern rock, and “60's Tiki-hut of sorts that featured a group of women singing and dancing nearly the whole hour-long parade.

The top prize went to the Taglienti family and friends whose 1920's era choice was inspired by the notorious gangster Al Capone. Their boat was decorated to look like a car from that era and the group (including two dogs) were outfitted in flapper dresses and other period attire. Two people dressed as police officers were in a smaller vessel tied to the main boat as they tried to “capture” Capone and his gang.

Barbara Kickham Sahagian, a board member of the LQWA, explained that the parade had actually been a popular tradition for many years but then had stopped about ten years ago. The group decided to resurrect it this year as a way to help bring attention to not only the lake itself but also to the efforts of the LQWA. The non-profit, volunteer-based organization advocates for issues related to preserving and maintaining the environmental and recreational quality of the four- mile lake.

“People seemed to be really excited we were bringing this back,” Sahagian said the day of the parade.? “But we didn's really know what to expect. We'se thrilled with how it turned out though.”

“We are also grateful to the sponsors for their donations for this first year,” she added. “We'se looking forward to making this even a bigger event next year.”

Shrewsbury Selectman Moria Miller served on the judging panel that met at the Donahue Rowing Center.

“I was so glad they asked me to be part of this. There seemed to be a really good spirit around this today – everyone was having fun,” she said. “This is really good for the lake and the town, too, to have an event like this.”

Parade organizers also expressed thanks to three members of the Worcester County Search and Rescue Team – Glenn Wians, Joe Apicella and Bill Latimer- who helped to keep the boats organized and to ensure everyone on the lake was safe during the event.