How can the Community Advocate help you promote your business?
Advertising Info
Suggest a Story
Free Subscription
Home Region Dale LePage croons for a cancer cause
Facebook
Twitter
Email 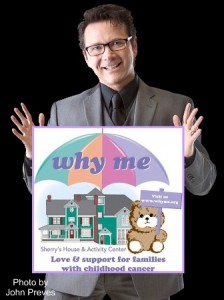 Worcester – One of New England's most popular entertainers, singer Dale LePage, is once again crooning for a cause. Voted “Entertainer of the Year” two years in a row for Central Massachusetts, and host of the Charter TV3 hit show WooTube, which reaches over 200,000 households in Central New England, LePage will be joining forces with a great charity for the local release of his latest CD, Dale LePage & the Manhattans LIVE!

Described as “swing with soul,” the CD will be launched Saturday, Sept 29 at the El Basha showroom located on 256 Park Ave. in Worcester, with a portion of the proceeds from CD sales going to Why Me.? Why Me is a Worcester based non-profit that provides love and support to families battling childhood cancer. Since 1985 they have support over 500 families with support groups, in-patient hospital visits, family fun events, direct financial support, and lodging at Sherry's House – a beautiful eight bedroom residence located in Tatnuk Square. All services provided are completely cost free, including lodging at Sherry's House.

“When I toured the facility, Sherry's House, I was very emotionally moved by the amazing work they do and their heartfelt message,” LePage said.

His last CD, A Crooner Christmas, was released in October 2011, and sold over 3,000 copies. A portion of those sales went to help the Worcester Animal Rescue League.

“This CD is what I have always dreamed of doing. I am playing with some of the most gifted musicians I know,” LePage said. “My mother always said, “If you want to be good at what you do, surround yourself with people who are great at what they do.””

The singer is now fronting a five-piece band that features guitar legend Joe D”Angelo and double-bass virtuoso Geoffrey Watson Oehling, along with drummer Thomas Spears and pianist Bobby Gadoury, both of whom have worked with LePage for the past three years.

For more information about Why Me, visit www.whyme.org.