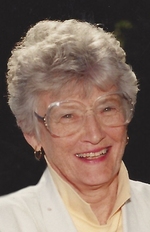 Flo was born and raised in Worcester, daughter of the late John A. and Florence N. (Harvard) Seaver and attended Worcester Schools. She married John A. Zona on June 15, 1946 and enjoyed a beautiful married life together for 66 years.

Flo was a faithful member of Saint Anne's Church; where she served as past president of the Women's League, was a member of the Confraternity of Christine Doctrine Team and worked several years for Human Services there.

She leaves her loving husband, John A. Zona; four wonderful grandchildren, John and Matthew Zona, and Keeley and Dillon Zona; a daughter in law, Karen Zona. She was predeceased by her two strong sons, John A. “Jack” Zona in 1999 and Robert F. “Bobby” Zona in 2011, and a brother, John Seaver.

The Zona family wishes to thank the dedicated staff at the Beaumont Rehab and Skilled Nursing Center in Worcester for all of their compassionate care shown to Florence and her family during her stay there.

Relatives and friends are invited to visit with Flo's family Monday, Oct. 15, from 4 to 7 p.m., in the Britton-Shrewsbury Funeral Home, 648 Main St., Shrewsbury. Her funeral will be held from the funeral home Tuesday, Oct. 16, with a Mass celebrating her life at 10 a.m. in Saint Anne's Church, 130 Boston Tpke., Shrewsbury. Burial will follow in Mountain View Cemetery of Shrewsbury.