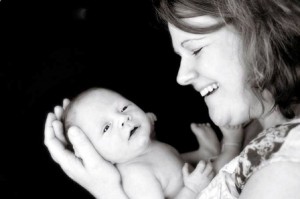 Northborough – When Dina Fraize became pregnant with her third son, she hired a doula (professional labor support/coach) to provide emotional, physical and informational support during pregnancy, childbirth and postpartum. The word “doula” comes from ancient Greek, meaning “woman's servant.” Having a doula proved to be a wonderful experience for Fraize and her husband who hired a doula for their next two pregnancies. Following the birth of her fifth son in 2001, Fraize decided that she, too, wanted to offer other women the same encouragement and support that her doula had given to her.

“I really feel like this career chose me,” Fraize said. “I wanted to help women have their babies in the hospital, inform them of their choices, support them in whatever they wanted to do, encourage them to make informed choices and birth the way they wanted to.”

In 1998 Fraize became an accredited La Leche League Leader. She led meetings on breastfeeding, parenting and nutrition while also providing individual breastfeeding counseling. In 2001, through the Association of Labor Assistants and Childbirth Educators (ALACE), she began training to become a birth doula. As part of her training, she started attending births in hospitals, birth centers and home settings.

Although she loved her role as a doula, the next obvious step for Fraize was to become a certified practicing midwife (CPM).

In 2007 Fraize completed a Midwifery Education Program with Woman Craft Midwifery in Amherst. Then, through the North American Registry of Midwives (NARM) certification program, she became a CPM – a title she earned in August 2012. According to Fraize, it is a long process of training, verification of knowledge and skills along with successful completion of both a written exam and skills assessment.

Unlike the doula who offers support, a midwife is a health care provider who is responsible for the care of mom and baby. She performs clinical tasks such as blood pressures, vaginal exams, monitoring the baby heartbeat, suturing, and other clinical procedures. A midwife does full prenatal care/postpartum care and “catches” the baby.

“We in the home birth world don’t deliver the babies,” Fraize said, “our clients deliver their babies – we “catch” them.”

The typical clientele are well informed, “regular” people, said Fraize, “They are not the stereotypical non-traditional, earthy, crunchy people portrayed in the media. Instead, they are lawyers, accountants, teachers, stay-at-home moms, chiropractors, healthcare workers, writers, scientists and computer programmers. They have lovely amazing birth stories, each and every one of them.”

While Fraize loves what she does, she is quick to add that there are many sacrifices that go hand-in-hand with the profession.

For a midwife, finding a balance between work and home can be difficult.

“I am required to be on call 24/7. I am called most times in the middle of the night, so I generally miss at least one night of sleep. It also means that I miss family events, anniversary dinners and my children's birthday parties. I go to my mommas in active labor and stay for the birth. After the birth, we [there are 3 midwives at every birth] clean up, do the laundry and leave the momma snuggled up in her bed with her new baby. When we leave, the house is spotless – we pride ourselves on leaving your house cleaner than when we got there.”

Sacrifices aside, Fraize says that the benefits of a home birth are huge.

As a midwife, Fraize participates in one of the most amazing experiences of a woman's life.

“It is an amazing profession, filled with joy and wonder. Every single birth is amazing and every single time a baby is born I tear up. I feel honored to be a part of each and every [woman's] birth experience. I can honestly say that I fall in love with each and every family,” Fraize said.