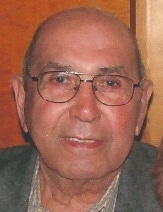 Born in Worcester, son of Manoog and Helen (Kushigian) Berberian, Kachie was a lifelong resident of Northborough. From 1947-1992, he owned and operated Berberian Brothers Farm with his late brother Teddy.

Kachie was recognized for his accomplishments in agriculture by the state commissioner of agriculture. He was an active member The Federation of Farmers” Markets in Massachusetts and a member of the Massachsuetts Farm Bureau.

He was a member of Siloam Masonic Lodge in Westborough, a member of Holy Trinity Armenian Apostolic Church of Worcester, and its men's club. Kachie was full of energy, very social, and simply enjoyed life. He especially loved flying his own Cessna 180 airplane.

He served in the U.S. Army in Europe during WWII and fought in the Battle of the Bulge. As a P.O.W., he spent five months in a German prison camp and later escaped to freedom through Czechoslovakia.

In lieu of flowers, memorial donations may be made to the Holy Trinity Armenian Apostolic Church.