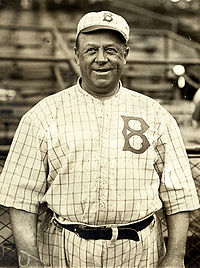 Hudson – The baseball career of Baseball Hall of Famer and Hudson native Wilbert Robinson will be the subject of the Hudson Historical Society meeting Tuesday, Nov. 27, at 7:30 p.m., at First Federated Church Hall. Wilbert Robinson, one of the first inductees into the Hall of Fame, was a major league catcher and, as longtime manager of the Brooklyn Dodgers, won several National League pennants.

The speaker will be Hal Thomas of Hanover, who has done considerable research on Robinson, the great-great-uncle of Thomas” wife, Jane.? Thomas will be accompanied by his father-in-law, Harry Wilbert Robinson, 92, who is also a Hudson native and son of the late Clarence Robinson, longtime president of the former Hudson Savings Bank.